The Adventures of Dad, Jorgito, and the Golden King Tut Ticket of 1978

If you know my family, you’ve probably heard the tale of “The Adventures of Dad, Jorgito, and the Golden King Tut Ticket of 1978.” It remains one of our favorite stories to tell because it has everything, laughter, drama, realizations about a child’s true nature, and mummies. It makes sense that it includes mummies since most Latino families pretty much embalm all sorts of moments they can drag out from its tomb now and again. It usually happens at a family gathering, especially during the holidays.

But I digress.  First, a little context to the Tut connection.

From 1976 to 1979, the treasures found in King Tutankhamen’s tomb toured seven U. S. cities, including Los Angeles. The exhibition was a wild success, to put it mildly. “King Tut Mania” was the only pyramid scheme destined not to bankrupt the regular folk. It was as if a Cecil B. DeMille film had come to vivid life, seeing these treasures. The mystery, the glamour, the history! All of it on display and separated by glass. Angelenos lost their proverbial shit when it arrived at the L.A. County Museum of Art. About eight million Americans made the trek nationally to the “Treasures of Tutankhamen” when it hit their chosen cities. However, more than one million visitors were tallied in Los Angeles alone. (You know how Latinos love their gold!) And, I represented two of said entries at LACMA. Reasons exist as to why.

Dad was already caught up in the fervor. A factory next to his was manufacturing swag to cash in on “King Tut Mania.” He’d bring home such replicated artifacts as Tut’s funeral mask, a small statue of the goddess Isis encased in a lucite pyramid. Yes, these were factory rejects, but so what? It was so rare to see Dad get excited by such things, but his being a pragmatic man meant that he was obsessed with science and history. He loved truth and facts versus the fantasy of the abstract represented by fiction. 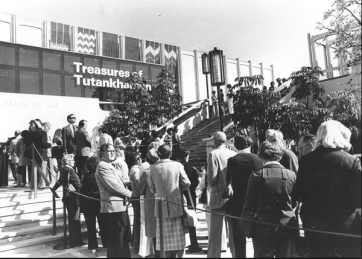 Tickets were sold out for the LA exhibition, but Dad was so proud when I was chosen to be one of the fifth graders from South Ranchito Elementary to visit with the Egyptian boy king at LACMA. It meant something to him that one of his family members could bear witness to this glorious exhibition of rarely-seen history.

A few weeks later, as the exhibition prepared its departure, Dad had this wild notion of heading down to LACMA to see if we swing two tickets. As he always stated, “The worse they can tell you is ‘No.'” So, we jumped into our aqua blue VW Beetle and made our way down Wilshire Blvd.

Mind you, Dad first sent me by myself to the box office to see if any cancellations were available. He waited in the car and I bolted up the steps to the museum entry. (I don’t think any parent would do that today. I was 10-years-old and Wilshire Blvd. was still a muy busy thoroughfare then.) Unfortunately, my this first inquiry did result in a “No” that held until I got back to the curb where I was to wait for Dad as he made a turn around the block.

As I kept a vigilant eye for Dad, I felt someone tap my shoulder. I looked up with nary a look of surprise to gaze at a handsomely dressed woman. She smiled this congenial smile and asked, “Are you trying to get tickets for Tut.” This wasn’t a “Stranger Danger” moment as she looked like she’d been to Bullocks Wilshire and that mattered to me then. Haha. I think I said something like, “Yes, ma’am. But there aren’t any tickets.” She then reached into her pocketbook and pulled out one of those Golden King Tut tickets from her pocketbook.

You could almost hear an angelic choir at that moment. I went’ from a “No” to a shocking “Yes!” Fortune really favors the child left alone on a busy street, dammit!

“My friend isn’t able to make it, so why don’t you take it,” she said.

I wish I remembered more of that exchange because all I know is after saying “Thank you, ma’am!” I took a good look at that ticket just as Dad pulled up to the curb. I do remember that I was too excited to enunciate, “Dad! I got a ticket. Look!” Dad smiled this huge smile.

Oh, how my family and I discussed the selfishness. The lack of awareness. The utter glory of my young self-absorption! For years!  Reflecting on that moment now, I know my Dad would have never left me in the car while he walked through the exhibition… again. Although, he did leave me to my own devices at the ticket office. Whatever. The important thing was for me to say, “Dad. Here’s the ticket.” For him to decline it would be a lesson in how we sacrifice our own needs and feelings. (Orale, Latinos católicos! Guilt starts early!) Haha.

Well, it is kind of true.

I do remember Dad’s dejected look as I turned and walked away. When we got home, I remember the silence in the car. I knew I hurt him a little. Once home,  I also remember hearing Mom and Dad talk about my brazen nature, my incredible luck, and my brazen nature again. It was followed by laughter, but I knew I disappointed them. Hell, I’d live to disappoint them again and again, but this episode remains my favorite since it carries a better layer of charm and innocence.

In the end, we both did get our chance to share the Tut experience in 2005 when “Tutankhamun and the Golden Age of the Pharaohs” made its appearance at LACMA. This time, the entire family made the trek to Wilshire Blvd. Of course, that adventure is marked by Mom saying, “Hmmm. This looks smaller than the exhibition your father and I saw in Cairo. You know, in Egypt.”  (Hahaha. Yes, we’re THAT family.)

In the end, my globe-trotting parents did venture to the land of Pharaohs to get a singular view, first hand, to the wonders of Tut and more. As much as I envy them, I am also proud of my parents, who took their vacations in places far and further away. They were our first guides, showing us the way to see the world as a source of adventure. We were meant to leave our backyards to see what doesn’t have to exist in a museum brochure. As a result, we’ve created our brand of history, too, and I love that.

It’s wonderful to see our family history repeating itself as Tut has returned to LA yet again. It’s been 100 years since Tut’s tomb was discovered, thus the largest exhibition of artifacts ever will be touring the world to honor the occasion, perhaps the last time they will ever be seen outside of Cairo. Los Angeles was selected to host the world premiere of “King Tut: Treasures of the Golden Pharoah” at the California Science Center. Of course, my family and I made the journey yet again and yes, the day is sold out. However, due to Dad’s current health issues, he won’t be able to make the trek to the California Science Center with us. Mom and Neto were also down for the count due to having colds.

My family and I know we don’t need a reason to celebrate the 40th anniversary of “The Adventures of Dad, Jorgito, and the Golden King Tut Ticket of 1978.” It is a bummer to note that glorious golden mask can no longer leave its home in Egypt. It just means our spirit of adventure will take us to the heart of the Nile, see the pyramids, and give them our best from our parents who stood there in awe and joy so many years ago.

This is such a powerful full circle moment nonetheless, one I will share with Poppadoodles when we return from our visit with El Rey Tut. I am reluctant to write more now as I feel tears building up. I have so much more to say to Dad from “Remember when?” to “Thank you” to “You were so right!” That’s a conversation that has to happen sooner than later and time is no longer on our side, I’m afraid.

As my family and I take in these treasures anew, I can’t help be reminded of the beauty of history.  Wherever these essays may rest long after I’m gone, I hope people will appreciate the love and respect that remain the hallmark of my Dad, as a parent and a human being. What I hope is also unearthed years from now is that our history as father and son, and as the Carreon Family as a whole, was a precious one indeed.

iamjorgecarreón Proud LAtinx motivated to make the world a better place, one word at a time.
Published March 31, 2018

One thought on “The Adventures of Dad, Jorgito, and the Golden King Tut Ticket of 1978”