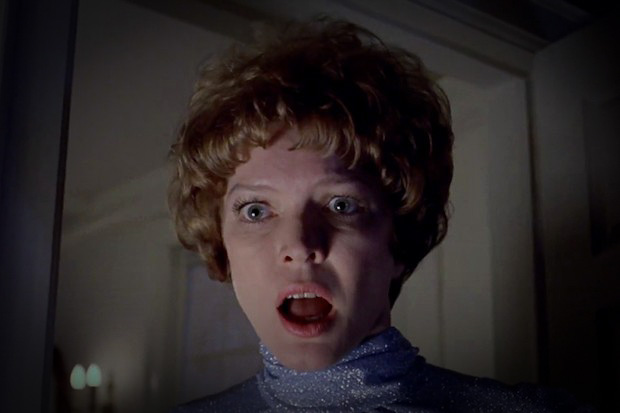 Real life is probably scarier now than ever, but a little artificial fear mixed with nostalgia is still a damn good treat for the senses. If you are finding yourself eager to shut out all that ails us in this pandemic/election double feature of doom, why not try my Fright Night Five Film Festival?

Alien (1979) – Ridley Scott’s epic monster in space story still packs a wallop. Often imitated but never equaled, the original ALIEN defined a new era for the genre. Exquisitely minimalistic in execution, it is a slow burn of building suspense until it explodes with terror and primal violence. It remains my favorite scary film ever, despite the diminishing returns of the franchise.

Runner up: James Cameron’s 1986 militaristic mash-up ALIENS, which turned Oscar-nominated star Sigourney Weaver into a hero archetype for the ages.

Carrie (1976) – Stephen King’s classic novel Carrie is a perfect expression of teen rage, manifested in a young woman with telekinetic powers. A visualized by director Brian De Palma,  CARRIE is a riveting blend of psychological drama and terror that reaches its devastating peak with a prom sequence for the ages.

However, the moments in between depicting Carrie being bullied at school by classmates and at home by her overbearing Bible-thumping mother give the film its most haunting and human qualities. Beautifully interpreted by future Oscar winner Sissy Spacek, CARRIE has since evolved into a cautionary tale that plays out even today with equally devastating results.

A Nightmare on Elm Street (1984) – Teenagers and horror go together better than “Boogey” and “man” for a reason. Leave it the horror auteur Wes Craven to create the ultimate nihilistic symbol of consequence: Freddy Krueger. Craven’s A NIGHTMARE ON ELM STREET is terrifying because its villain results from the vigilante justice engaged by a group of parents seeking to stop a predatory child murderer. When their teenagers start to die one by one, this narrative of an unstoppable vengeful ghost instantly became mythic and a perfect representation of our current ethos. What happens when you can’t take care of your kids in an era of rampant American individualism? That’s a nightmare, alright.

Halloween (1978) – If you’re a child of the late 1970s and early 1980s, you will remember where you were when the theme to John Carpenter’s HALLOWEEN scared the shit out of you for the first time. It rivals John Williams’ theme to “Jaws” as a harbinger of death. The slasher film was alive and well, an outburst of anarchy brought on by the American Dream’s demise. After Vietnam, Nixon, and the gas crisis, America was numb and angry, among other societal malaise. New cultural monsters were born, and standing tall amongst them was the notorious and sadistic Michael Myers.

Myers was rage incarnate, another silent and vengeful killing machine, and it didn’t matter who stood in his way. As a horror film, it is a compelling example of cause and effect. You watch, you scream, and you laugh nervously at your reaction. It helps that star Jamie Lee Curtis as Laurie Strode is such a relatable screen heroine. We are all Laurie in that we will survive, dammit. However, look closer and try to project into the film what you fear at this moment in time. It’s a whole different movie experience. Trust me.

The Exorcist (1973) – If you’re craving tales of demonic possession, then THE EXORCIST is for you. What makes William Friedkin’s visceral supernatural thriller so compelling is having a young child at the center of a terrifying reality. Stars Ellen Burstyn and Linda Blair are like watching a beautiful duet of humanity as a mother and daughter, even as all hell breaks loose in their Georgetown home.

In 1973, audiences reacted to this film by waiting in line for hours, some in freezing weather, to get a ticket. THE EXORCIST became part of the national conversation, even surpassing the Watergate scandal for a moment. Nearly 50 years later, though, aspects of THE EXORCIST feel quaint in terms of effects. The narrative, however, still shakes you up hard. It is a superbly crafted film experience, preying on all that you fear, whether you’re religious or not. Don’t watch it alone in the dark – or better yet, do. You’ll see and hear things all over the house that are NOT on your screen.

Enjoy the first ever Fright Night Five from the Carreón Cinema Club, mi gente. Be safe and sane out there — and wear a pinche mask! It’s alright tonight, ya tú sabes!